Organ students attend most of their music classes, lessons, recitals, and practice sessions in the main Music Building, located at Avenue C and Sycamore streets on campus. Across Avenue C are the Music Practice buildings (designated Music Practice North and Music Practice South) for practicing piano, percussion, and other portable instruments. A short walk across campus in the other direction, facing Hickory Street near Avenue A/Fry Street, is the Main Auditorium, which houses the III/58 1949 Moller, Op. 7676, and includes our prized 1985 Bedient IV/41 French Classical Organ. Both are used for teaching, recitals, and practicing. Organ recitals also take place in the Organ Recital Hall, Room 253, the dedicated organ facility in the Music Building which houses the Circa 1970 Rieger II/11 tracker. 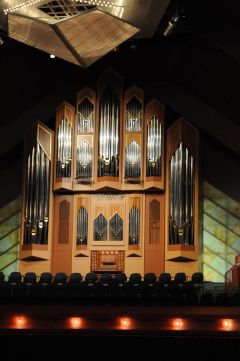 The Ardoin-Voertman Concert Organ, inaugurated in 2008 by world renowned organists James David Christie, Dame Gillian Weir, and Jean Guillou, stands with gravitas in UNT's Winspear Hall, the main performance venue in the Murchison Performing Arts Center. Being Wolff's second largest instrument, this organ ecompasses 60 stops on three manuals and pedals and was conceived to suit the needs of large ensemble forces, specifically for the orchestral and choral repertories. Having significant stylistic features from the central German area, this is a precious resource for the performance of J.S. Bach's organ music; the stoplist was rounded off with suitable resources and winding for later nineteenth- and twentieth-century works. The organ's case, painted to blend with the hall, features geometric shapes and angles of the hall, with its own pentagonal window behind the organ loft. Except for the Swell division, the facade pipes reflect their respective keyboard divisions. The stops are drawn electrically and the most up to date electronic assistance devices help the players with registration. We are forever thankful to Denton philanthropist Paul Voertman for his generous support of this concert organ and of our program at large.

Acquired through a generous gift from Robert and Shirley Ottman, the Bedient IV/41 French Classical Organ is located in the Main Auditorium. It was built for St. Mark's Episcopal Church in Grand Rapids, MI, as a gift to the church and to the community from Sara H. Lowry and O. William Lowry by the Gene R. Bedient Co., Lincoln, NE, and dedicated in Grand Rapids September 14, 1986. The design was based on research of historic French organs at Souvigny, Houdan, Poitiers, Mitry-Mory, plus various written and other sources. It is built in the style of an 18th century French organ, although not a copy of any particular instrument. Technological changes make exact replication impossible and financially unfeasible. The case is made of hand-planed white oak, stained and finished with a traditional rubbed shellac finish known as "French Polish." Special moulding cutters were ground in the Bedient shop to approximate the moulding profiles of the 1778 organ at Souvigny. The keyboards are of oak with naturals of cowbone and sharps of ebony. The French pedalboard is oak.

The simple suspended mechanical action system uses trackers of sugar pine and brass with rollerboards of steel, oak, brass and hickory. Positif and Echo backfalls are of oak. The stop action system is of steel with stop knobs of walnut and porcelain faces. Windchests are of mahogany, oak, sugarpine, with some brass, steel and leather used. The front pipes feature raised romanesque mouths, and are made of 88% tin burnished to appear shiny. All interior metal pipes have lead feet and languids, a common French practice. The reed resonators and bodies of the interior open pipes are of 88% tin, while the bodies of the metal stopped flutes are of lead. All tin and lead sheets were hammered before being made into pipes. Wooden pipes are of oak and mahogany. The wind system consists of an electric blower with large, multiple-fold bellows that deliver 100 mm of pressure through a series of oak windtrunks and through the Tremblant doux and to the chests. 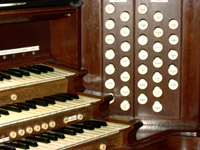 The 1949 Moller III/55 organ housed in the Main Auditorium, originally built in 1924, was thoroughly rebuilt under the direction of Professor Helen Hewitt in 1948-49, and represented an "enlightened" tonal design for an organ of this period with principal choruses in the Great, Swell, and Pedal divisions. No doubt due to Professor Hewitt's formative years in Paris as a student of Joseph Bonnet and Louis Vierne, the Swell reeds received special attention and are a fine specimen of French reeds as understood by mid-twentieth century American builders. Unfortunately, the entire instrument was buried 12 feet in back of the large tonal openings, resulting in poor tonal focus and clarity, not to mention sluggish response for the player at the console. Most of these difficulties have been addressed and the organ stands today as a well-preserved, representative example of mid-twentieth century electro-pneumatic actions. A thorough mechanical restoration was completed in 1994-95, and since 1999, a number of tonal improvements and additions to the stoplist have greatly enhanced the organ's flexibility for nineteenth- and twentieth-century repertoire. Additionally, the decorative plaster dagger motifs in front of the organ chambers were reduced by about 60 percent in 1999, allowing for the instrument to speak much more clearly and brilliantly in the room.

In 2011, the console of the Moller Op. 7676 was restored by the Schudi Organ company. The decision was made to maintain the mid-twentieth century electro-pneumatic system making it a unique organ in the region that will continue to make it an exemplary instrument for education and performance for many more years. In 2013, a 16' Double Open Diapason was installed, adding to the already diverse and rich palate of this unique organ.

Of special interest are the 8-foot Harmonic Flute on the great; the Tierce and Grosse Tierce on the swell division; and the Cromorne 8 on the choir, a gift of Marie-Madeleine Duruflé-Chevalier in loving memory of her husband, Maurice Duruflé, in April 1992. 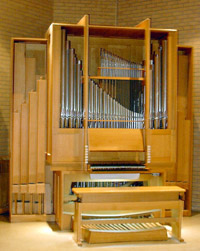 Nearly all organ students begin their study at UNT on the Circa 1970 Rieger II/11 tracker, located in the Organ Recital Hall, Room 253, the dedicated organ facility. Each student is allowed a set amount of practice time weekly on this organ. 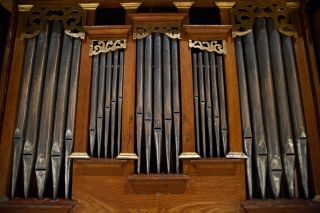 The College of Music recently acquired a 5-stop historic organ constructed about 1780 in Europe and brought to Texas by German immigrants sometime in the 1850s.  After being discovered by the builder Ruben Frels years ago, the organ was lovingly restored to playing condition by the renowned Susan Tattershall during the 1980s.  About 1990, Susan Ferre and Charles Lang purchased the organ, and for many years it was on display at the Mesquite Arts Center.  The organ currently is winded by the traditional manual pump, and will eventually be retrofitted with an optional electric blower.

Four practice organs are available on the third floor of the Music Building: two Hofmann II/9 (trackers), one Fisk II/6 tracker and one Flentrop II/2 tracker (with mean-tone tuning).

The four practice organs are on the third floor of the Music Building. They include: 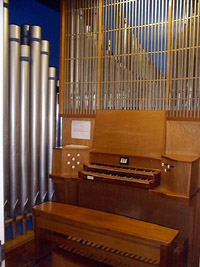