The UNT Organ program boasts faculty members with credentials from some of the top organ programs in the United States and Europe. In addition to being outstanding educators, organ faculty members are equally well regarded as performers, researchers, and composers. 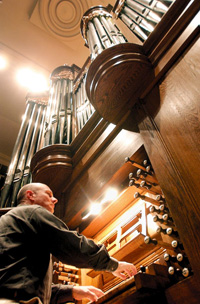 Professor Eschbach is a graduate of Indiana University and the University of Michigan where he was a student of Robert Glasgow. He completed his formal education during a five-year residency in Paris as a student of Marie-Claire Alain, specializing in early French music in her conservatory class at Rueil-Malmaison where he was awarded both a Prix d’Excellence and a Prix de Virtuosité. As one of the very last students of the legendary Marie-Madeleine Duruflé-Chevalier, he studied the complete organ works of her husband, Maurice Duruflé, as well as much of the French symphonic repertoire. Since 1986, Eschbach has served on the faculty at the University of North Texas as the full-time Professor of Organ, instructing performance majors at all levels, and is Coordinator of Organ. His students have dominated the annual San Antonio competition since 1995 and have won prizes in national competitions as well.

A very active performer until 1998, Eschbach has several CDs to his credit, including a disc recorded at the Cathédrale de Perpignan entitled “Music of the Second Empire and Beyond”, released in June, 2003. Also released in 2003 was his 800+ page book, detailing the original stoplists of the majority of organs constructed by Aristide Cavaillé-Coll, based extensively on the Lapresté collection. This research is still in progress, and an expanded second edition will be released in the next few years. The first edition received a very positive “feature review” in the March, 2007 issue of The American Organist. Likewise, his CD recorded on the 1857 Aristide Cavaillé-Coll organ in Perpignan consisting of works by Lemmens, Franck, Gigout, Fessy, Schubert, and Couturier garnered high praise in a February, 2007 review in The Diapason. Michael Conrady is the Organist and Choirmaster at St. Thomas Aquinas Catholic Church in Dallas, TX. A native of Anthony, KS, he received his bachelor’s degree at Baylor University, where he studied organ with Joyce Jones. While at Baylor, he was the first-place winner of the 1998 William Hall Organ Competition. His graduate degrees include the Masters of Music (MM) in organ, the Masters of Theological Studies (MTS), and the Masters of Sacred Music (MTS) degrees at Southern Methodist University, where he studied Sacred Music with Michael Hawn and Chris Anderson, organ with Larry Palmer, and conducting with David Davidson.

Postgraduate studies led him to the University of North Texas, where he studied organ with Jesse Eschbach for two years, specializing in 18th-century performance practices of France and Germany. He completed the Doctor of Ministry degree at SMU in 2019, studying liturgics with Mark Stamm. His doctoral thesis was written on the topic of Communion antiphons in the Roman Rite.

Dr. Conrady oversees an active and vital music program at St. Thomas Aquinas that is known for musical excellence. During his tenure, the ministry has grown to feature eight diverse choirs, an exemplary children’s music program, a contemporary worship ensemble, a cantor ministry, and a concert series. As part of his responsibilities at St. Thomas Aquinas, he conducts three of the parish’s regular choirs (St. Thomas Aquinas Choir, St Francis Choir, and the Schola Cantorum) as well as the Palestrina Singers, a professional Renaissance choir which sings at special concerts and holy days throughout the year.

In addition to parish ministry, Dr. Conrady also concertizes, composes liturgical music, and serves on a number of area boards and commissions related to music, liturgy, and theology. His involvement with the American Guild of Organists has included the roles of chairperson of the Robert T. Anderson Recital Series and the Southwest Regional Coordinator for Education. He was certified as an Colleague of the American Guild of Organists (CAGO) in 2005 and as an Associate (AAGO) in 2007. He has served on the Dallas Diocesan Liturgical Commission, the Diocesan Commission for Sacred Spaces, and as organist for the Diocesan Choir. He is active in the Hymn Society of United States and Canada, where he presented the opening hymn festival at the 2019 convention and has taught seminars on liturgy and music at previous annual conventions. We honor the life and work of Mark Scott, who coordinated the Sacred Music curriculum for 10 years at UNT.  During his tenure, this curriculum was completely restructured and is now available to graduate students as a minor (related field).  The following is used with permission from St. Stephen Presbyterian Church, Fort Worth.

Mr. Peter Mark Scott, St. Stephen, Fort Worth's Minister of Music and Organist for almost forty years, entered the joy of God's heavenly worship Friday, October 17, 2014, at around 5:30 a.m. Mr. Scott's creativity, talent, and faithfulness shaped St. Stephen's unique style of worship. His organ music and choir direction conveyed the mystery and majesty of God. Several generations of St. Stephen children had their appreciation for music and the gospel shaped by Mr. Scott's humorous but always disciplined way with children. One of his greatest joys was teaching children and youth. Mr. Scott was a gifted church musician and choir director, but he was also a pastor to many, and the stabilizing rock of this church through the last forty years. His strong will, sharp wit, and confidence in God served a reassuring and even visionary role to parishioners in good times and bad.

"For not one of us lives for himself, and not one dies for himself; for if we live, we live for the Lord, or if we die, we die for the Lord; therefore whether we live or die, we are the Lord's" (Romans 14: 7-8). Mr. Scott lived his life for the sake of Christ and St. Stephen, giving himself freely and joyfully to the church and its mission for decades. While we mourn his loss, we rejoice that Mark has joined his talents to that choir of saints and martyrs who worship God eternally in God's Kingdom, in that place where suffering is ended and there is only eternal joy in the Lord.